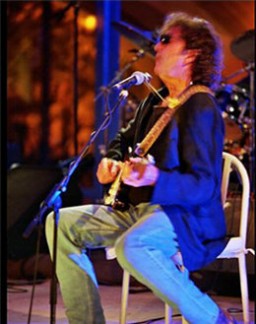 Tony Joe White arrived with his famous Stratocaster guitar (from 1961) straight from Nashville, Tennessee. Host Ricky Peterson welcomed him at la Tour Fondue and they boarded the taxi boat to get to the Island of Porquerolles.

Tony Joe couldn´t wait, so first he checked out the guitars and amplifiers, well he seemed to be satisfied. And soon after “Chef” Laurent guided Tony Joe on a first tour through the winery and the cave, tasting here and there. This year, that color … . And still after that he wasn´t tired, don´t forget he had a long trip with unexpected plane changes, but he just couldn´t resist to play some first tunes in the Chimney Room, the Marting guitar sounded great ... .

A definite highlight was Tony Joe’s rehearsal, only a few privileged people had the chance to assist the Master of Swamp jamming for the first time with the band. The music was great, the atmosphere perfect, everyone could feel that something very special was happening ... . After all, it was Ricky Peterson’s birthday, who couldn’t have imagined a better birthday present.

The next day, it was time to go fishing. Why? Well, Tony Joe is a great fisherman, and his Tennessee neighbor Chad Cromwell is as well. They sat with host Ricky “on the dock of the bay” and tried to fish out of the Porquerolles harbor. The boys enjoyed telling stories from “back home”, but unfortunately the fishermen left empty handed. Another passion of Tony Joe White is cooking, so he had brought a cookbook with recipes from his mother and her grandmother called: “Polk Salad Annie's Food for the Soul”, that name sounds familiar, doesn´t it?

On the way back to La Courtade, they stopped at Roland’s bar “Cote Port”. Owner Roland happens to be a great fan of Tony Joe White, so of course he enjoyed to say hello and have a drink. And he must have liked this place with view to the ocean, so the short stop ended up turning into an interview with Tony Joe. The interview started with talk of fishing, but eventually Billy Peterson and Tony Joe found themselves in a deep discussion about what “makes” an artist.

That night was Tony Joe’s concert, a memorable concert. The frogs were singing with Tony Joe, and believe it or not, they were “right on the click” when he performed his famous song “Polk Salad Annie”. Don’t worry, the frogs are kept in the mix so you will hear them. Next came “Rainy Night in Georgia”, which many of us may have heard from other artists such as Ray Charles. “I want my Fleetwood back”, “Cold Fingers” and “Gumbo John” were all on the set list. Eventually the wonderful concert came to an end, but nobody will forget Tony Joe White’s so called “frog” concert at La Courtade on the Island of Porquerolles.

American singer-songwriter and guitarist Tony Joe White is best known for hits such as "Polk Salad Annie" (1969), "Rainy Night in Georgia", which he wrote but was first made popular by Brook Benton (1970), or "Steamy Windows", a hit for Tina Turner (1989), amongst other hits he wrote for Tina Turner. "Polk Salad Annie" was also recorded by Elvis Presley and Tom Jones.

Over the years Tony Joe White toured with numerous mayor artists, including Joe Cocker, Eric Clapton Steppenwolf, Sly & the Family Stone, Creedence Clearwater Revival, Roger Waters; his tours brought him all around the US and many European countries, especially in France White has a big following.

Tony Joe White counts more than 25 albums, among them "Uncovered" that was released in 2006 and featured collaborations with Mark Knopfler, Michael McDonald, Eric Clapton, and J. J. Cale.