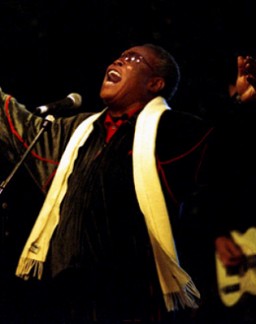 Sam Moore (from Sam & Dave) considers his concert for the Legends Rock Show as one of his very best. And it’s true, it really was magic.

Guided by host Ricky Peterson Sam Moore and his wife and manager Joyce discovered the charm and beauty of the Mediterranean island, the vinery and the small village “downtown” Porquerolles with its nice restaurants, boutiques and a beautiful old church. Although Sam arrived with a cold and was told by Joyce to pay attention to the “fresh air” of Porquerolles, Sam escaped on a long walk along the Courtade beach with producer Hans W. Stachowiak. Deserted by the tourists at this period of the year, they must have enjoyed the moment spent on the beach since they did not come back early, which made some journalists wait … . Useless to say that Hans got to know the less charming side of Joyce for having taken Sam to the beach in the cold air… .

Well ...  and then it didn´t take long before the first jam session took off, in the famous cheminey room of the Domaine de la Courtade, with its huge fireplace. Ivan Bodley, Sam’s musical director and bass player, assisted Billy Peterson to get the musicians into the famous music of Sam & Dave.

And then, the cooking part with local “Chef Laurent”? Well, French cheese is eventually not Sam´s favoured thing, but, oh, man, we are still laughing when we remember Sam telling unknown stories in the kitchen or in the patio, especially the one with Jimmy Hendricks… . But this is not the only one that made us laugh loudly!

The next day, it was time for the rehearsal, with the complete Legends Rock band, background vocals Gaelle Maevis and Beverly Joe Scott, the horn section from Marseille. And its true, there was already something in the air, .... , the magic of this unique location with its over 1,000-year-old olive trees, nicely illuminated such as the forest at the end of the property’s park. What an excitement when Sam started his concert in front of a local public with “Hold on, I’m coming”. Everybody was blown away, his voice was better than ever, the band enjoyed playing more from title to title, the concert took off, the magic of the music was there. It was really an amazing, unique concert with one moment definitely nobody will forget: “What’s wrong with my Baby”. No doubt, this song made everybody cry, there was a strong emotion on stage, you can feel it when you watch images of this unbelievable concert. Somebody in the audience couldn’t stand it anymore and jumped into the pool… .

Sam must really like Porquerolles, so, he came back to accompany his buddy Billy Preston, who was guest star of another Legends Rock episode. Of course, they were performing some songs together, such as “You are so Beautiful” one of Billy Preston’s great songs and the Beatles song “Get Back”... . But, you better watch yourself, click here to get some impressions.

Moore is best known for his work as Sam of the soul duo Sam & Dave, where he was the higher tenor voice (1961 - 1981). Sam & Dave were the most successful and critically acclaimed duo in soul music history.

The award-winning recording artist Moore has also achieved a distinguished 25-year solo career. In 2008 the Rolling Stone Magazin named him one of the 100 greatest singers of the rock era (1950s-2008). In 2002 Music critic Dave Marsh called Moore "The Greatest Living Soul Singer."