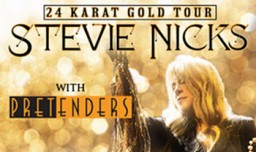 Megabien keyboardist Ricky Peterson is joining once again singer Stevie Nicks on her forthcoming tour, the 24 Karat Gold Tour, which will kick off on October 25.
Nicks, who will be joined by the Pretenders for this tour, will perform throughout North America with shows scheduled in her hometown Phoenix, New York City, Los Angeles, Toronto, Vancouver, Chicago, Philadelphia, Atlanta and more. A full list of tour dates can be found here.

The 2014 album “24 Karat Gold – Songs From The Vault” debuted at No. 7 on Billboard’s Top 200 Charts. This 27-city tour will be Nicks´s first “solo outing” since Fleetwood Mac finished the “On with the Show” tour last November, for which Nicks performed 122 sold out shows around the world during 2014-2015. Collectively as a solo artist and Fleetwood Mac band member, Nicks has sold over 140 million albums and won several Grammys.

The Pretenders cross the bridge between punk, new wave and Top 40 pop music more than any other band, with hit songs like “I’ll Stand By You”, “Back On The Chain Gang” and “Don’t Get Me Wrong”. The band has sold over 25 million albums and founder & leader Chrissie Hynde is one of contemporary music’s greatest songwriters.